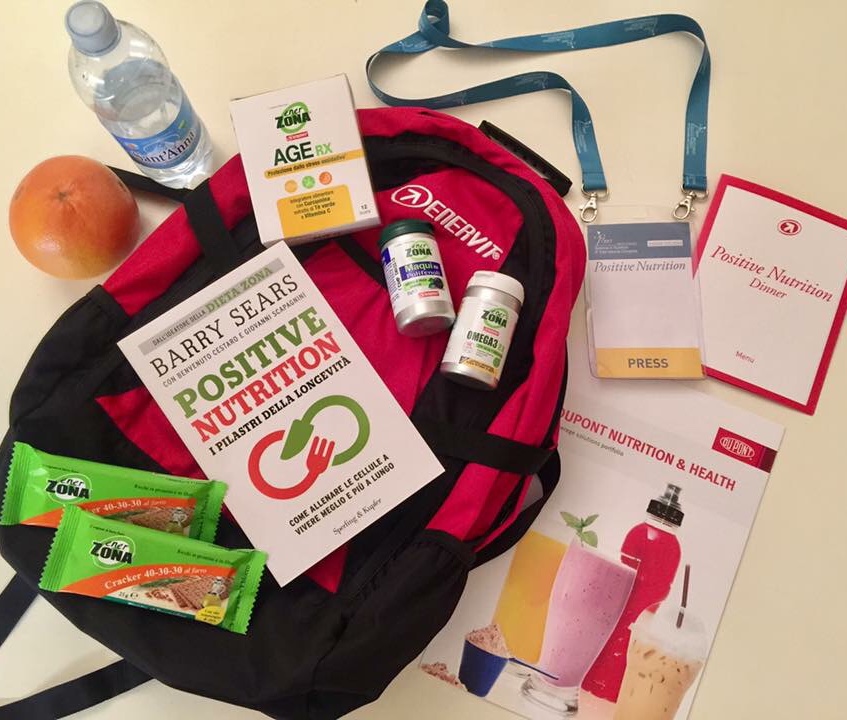 BARRY SEARS PROVES THAT THE “POSITIVE NUTRITION” TRAINS THE CELLS TO LIVE BETTER AND LONGER.

The 4th International Congress of Science in Nutrition, entitled “Positive Nutrition“, was held in Milan on 5th and 6th of May 2017. Its purpose was to teach how to train cells to live better and longer, with Positive Nutrition, thanks to the Enervit equipe, who investigates, produces, and tests athletes’ preparation, diet and supplementation. Respected international science experts participated in this three-yearly seminar, organised by the Paolo Sorbini Foundation. they addressed topics pertaining to food, health and prevention of ageing, making science practical and accessible, with the contributions of Professors Giovanni Scapagnini, Rodolfo Tavana, Benvenuto Cestaro, Camillo Ricordi, Sara Farnetti, Fabrizio Angelini, Artemis Simopoulos, Gregory Paul, Elena Casiraghi, Luca Mondazzi, Davide Grassi, Stefano Righetti, and Ironman professional athlete Asker Jeukendrup. Barry Sears, the creator of the Zone Diet, acknowledged that the 4 pillars of longevity, described in his new book “Positive Nutrition“, matches the 4 pillars of Wellness and are found in everyone’s blood. They can be summarised as follows: 1) adopt calorific restriction, with the Zone Diet, to fight silent cell inflammation and reduce blood glucose and insulin levels, as we are gradually becoming insulin-resistant; 2) integrate Omega-3 fatty acids and SuperFoods on a regular basis; 3) train cells to a positive attitude, approach the revolutionary concept of Positive Nutrition, as a lifestyle, focusing on the positive aspects of healthy people or population that live longer than the average; 4) excercise to lose weight, increasing the muscle mass with “therapy molecularbaking“, which creates a 20 gr protein cage per meal, in order to change intestinal hormones, similar to gastric by-pass that changes the location of intestine absorption.

Neuroscientist Prof. Giovanni Scapagnini talked about silent cell inflammation, a sort of “genius and madness”, as it is a good defense mechanism but also the most significant cause of ageing. Nutraceutical is an effective option to fight it, as it gives a positive contribution and constitutes a stock of energy that can beintegrated with organic quality supplementation, which can currently be more natural than the normal available food. This allows to biochemically maintain thebalance between of Omega 3 and 6 in the blood. Professor Scapagnini has investigated for years the nutritional habits and the lifestyle of centenarians who live in Japanese southern islands, in Okinawa. He understood that their secret is not found only in their genes, but also in their daily low-calorie diet, rich in great sources of high quality proteins, from soy, fish, and superfoods such as algae, tofu, vegetables, green tea, and spices, especially curcumin. Japan is only an example but five Blue Zones exist in which the number of centenarians is significantly above the average: some areas in Italy, Greece, California and Costa Rica. Doctor Artemis Dimopoulos, specialised in Omega-3 and 6 fatty acids, suggested the application of modern technology with a view to the past, to 10,000 years ago, when the Palaeolithic diet rich in berries and seeds featured balance between Omega 3 and 6. Since then, our genes have not changed but nutritional habits have, so that in western diets Omega 6 is widely available on the market, with destructive effects on obesity, diabetes, rheumatoid arthritis, Alzheimer disease, and Lupus. The solution lays in Positive Nutrition, in the nature of food, and the way it is cooked. Diabetes professor Camillo Ricordi, who works in Miami, is concerned by the outbreak of 400 million people in the world suffering from diabetes. Cell inflammation resulting from inadequate food is the most important killer of autoimmune and degenerative diseases. Insulin is a good hormone but it must be kept under control, because it can be fatal or life-threatening under the influence of “disreputable company”. At the moment, the engineered transplant of pancreas is an option, together with a protocol of high doses of Omega 3 and vitamin D, in case of organ rejection. The doctor suggested that awareness must be raised in people, governments, schools, and new generations, with functional informative education. University professor Benvenuto Cestaro emphasised the importance of reducing complex carbohydrates, in a nutritional treatment to prevent inflammation, fight oxidative stress, ageing, and chronic disorders or diseases, such as cancer, which “loves sweets”. Therefore, by significantly reducing theabsorption of sugar, we deprive malignant disorders of their “fuel”. Moreover, he specified that there is also Omega 7, or palmitoleic acid that can be found in nut and almond oil.

Doctor Sara Farnetti presented functional nutrition and considered hormonal and hygienic factors of food, to control future chronical disorders, caused by cell inflammation. She suggested that food has to be chosen smartly, with a synergistic and bioactive mix resulting from the integration of “friendly” foods, such as oilseeds, pine nuts, almonds, avocado, tomatoes, 85% dark chocolate. Elena Casiraghi, Enervit’s nutritional expert, offered pieces of advice for excercise, like the idea of “100 minutes of weekly exercise”, divided into 40 minutes at the weekend and 30 minutes in two work-days, preferably in the morning and on an empty stomach, to better train cells. They should be interrupted by rest days and strength free-body workout, circuit-trainings, in order to strengthen bones and metabolism. Doctor Rodolfo Tavana, sports doctor and orthopaedist, commemorated with intensity and professionalims the commitment and expertise of Professor Enrico Arcelli, who passed away three years ago. He created an athletic preparation in Italy and made scientific concepts easy to apply and access, with his outstanding capacity for teamwork, relaxed attitude, and his great love for running. DJ Linus, famous athlete and marathon runner, also described his weekly trainingfor the bi-weekly run, as a sacred and indispensable commitment. During the Positive Nutrition Dinner, Alex Zanardi, Rio Para-Olympic champion, a true “force of nature”, revealed that positive psychology is the ingredient that makes the difference in the athlete’s mind, in order to succeed in sport and life. During the two-day conference, I underwent a simple free blood test, for the analysis of lipids, in order to observe inflammation and blood coagulation levels. The test analyses the relationship between spinal acid and EPA/DHA fatty acids, in order to observe the biochemical balance between Omega 3 and 6. This full-immersion in long-life and health taught me that cells and blood are the power stations of ageing. The instrument required to live better and longer, beyond one-hundred years, is positive food, as a powerful medication, to fight the main enemy of youthfulness, namely inflammation. It is great to retrieve ancient theories and interpret them from a modern perspective, for future wellness! (Raphaella Dallarda – INSPATIMEBLOG)

Join our social and be the first to know about all our news!